26 gennaio 2015Leave a commentAmericas, The book 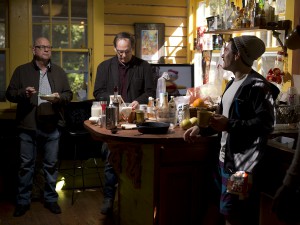 In New Orleans I met Zella Palmer, Director, Dillard University Ray Charles Program in African American Material Culture and partner of EatUp Project. She accompanied me among the foods and flavors of the Southern States. In particular we experienced an intense Thanksgiving Day.

How an inhabitant of New Orleans intends the creole culture particularly in the field of food?
Everyone knows in New Orleans that the best New Orleans meal is not in the tourist restaurants but in the homes. This is where New Orleans cuisine continues to uphold its legacy and international notoriety. If you are fortunate enough to be invited to a true New Orleanians home, your taste buds will dance a second line and marvel at the bold and rich flavors that is a cultural gumbo of Europe, West Africa, the Caribbean and Native America.

What about a perfect way to live the Thanksgiving Day in New Orleans?
Thanksgiving day in New Orleans in some homes begins with a mimosa champagne breakfast before heading to the New Orleans Fair Grounds Race Track with friends and family. Many look like they stepped out of a chapter of the American classic novel, The Great Gatsby. However, for many New Orleanians the day is spent with family over a hot stove of seafood gumbo, stuffed shrimp mirlitons and fried or roasted turkey. This is a rest day for many who work day in and day out and a big screen television in anticipation of watching American football is the highlight of the holiday.

For many African Americans, the Bayou Classic, a 40-year old tradition, Thanksgiving Day parade is attended after the family meal.  Louisiana’s own Grambling University “Marching Tigers” and Southern University “Human Jukebox”, (HBCU) Historically Black Colleges and Universities marching bands leads the afternoon with the most highly spirited music to move all of the New Orleans downtown onlookers. The parade, a preview to Mardi Gras, hosts local high school marching bands, social aid and pleasure clubs, military units and motor clubs. The rest of the evening is spent heating leftovers and enjoying time spent with family.

Ms Linda and Chef Gason, the old school and the new generation. What’s really different?
Ms. Linda Green ‘Yakamein Lady’, Food Network “Chopped” winner, culinary training began at home with her mother who’s mother taught her mother and so on. Ms. Linda believes in upholding the culinary traditions of New Orleans cuisine. “So many chefs these day want to change New Orleans food. Make it fancy to impress somebody. You don’t have to do that. It was perfected for generations. Which is why when people try my food they are blown away. It’s New Orleans all day just like my momma used to make it.” Ms. Linda’s Yakamein, a New Orleans Creolized Asian Beef Noodle Soup is a favorite New Orleans soup. Yakamein is complex, rich with flavor and will cure any hangover or cold. Ms. Linda serves up a hot bowl of Yakamein and other classic New Orleans dishes throughout the year at neighborhood food and music festivals.

Chef Gason Nelson learned how to cook from his father at a young age and was later classically trained at Delgado Culinary College in New Orleans, Louisiana. Chef Gason Nelson is known across the country as one of the very best personal chefs in the business. A two-time James Beard Scholar, Chef Gason’s extraordinary culinary skills have taken him around the world to cook for those with the most discriminating tastes including Jairus Byrd, Paul Walker, Reggie Bush and Duane ‘The Rock’ Johnson and New Orleans Saints’ tight end, Ben Watson. In addition to his experience as a personal chef, Chef Gason also competed on the Food Network show, “Chopped”. Chef Gason’s food is defined as New Orleans contemporary cuisine catered to the individual client for his personal chef business, Full of Flavor.